Join us for Monday’s National Organize to Win Call when our line-up will feature Maryland Congressman Jamie Raskin, the new progressive chair of the Nevada Democratic Party Judith Whitmer, and other special guests!

IN THIS ISSUE:  Two landmark bills move forward — Medicare for All is introduced in Congress and For The People Act heads to the Senate; the latest on fighting the filibuster, standing up for Amazon workers, and more!

Bernie started Our Revolution with a single purpose:

To build a powerful grassroots movement that makes progressivism a transformative force in American political life.

We carry out this mission by supporting a national network of state and local groups who are organizing to hold the President & Congress accountable to the progressive movement, elect progressive champions at every level of government, fight for progressive policies, and transform the Democratic Party into a truly progressive party.

Learn more about what we did this week to fulfill our mission below!

On Wednesday – just hours before the introduction of the Medicare for All Act of 2021 in Congress – Our Revolution held a nationally live streamed rally outside the U.S. Capitol with Michigan Congresswoman Debbie Dingell, a lead sponsor of the bill, to show America that there is grassroots support for universal coverage.  Rep. Dingell spoke about the urgency of the moment – over 100 million remain uninsured or underinsured during the pandemic – saying, “Now is the time to create the momentum to get Medicare for All passed and guarantee every American access to healthcare.”

After the rally, Our Revolution Maryland‘s Phil Ateto joined Rep. Dingell and Rep. Pramila Jayapal for MFA’s official introduction in the US House and shared his personal story.  Phil said that 11 years after a devastating cancer diagnosis, he’s still fighting for his life.  “But my fiercest battle hasn’t been with my disease – it’s been with my health insurance company.”  Phil’s insurer initially refused to cover the drug – which cost $23,000 per month – that Phil needs to stay alive.  After persistent appeals and organizing, Phil finally got the lifesaving medicine he needed.  “My story is not unusual.  Too many people like me are sick and dying and denied care because of a healthcare system that makes decisions based on what saves money instead of what saves lives.  We can build a system that prioritizes health and puts people first – it’s called Medicare for All.”

Thanks to years of unrelenting pressure by Our Revolution New Jersey, Rep. Frank Pallone, Jr. – Chair of the House Energy and Commerce Committee, the main committee on healthcare – signed on this week as a Medicare for All Act co-sponsor and committed to holding a hearing on the bill. “After three years of rallies, protests and consistent birddogging, our movement had a major victory on Tuesday. Getting one of the most powerful Democrats in the country to co-sponsor Medicare for All is a game-changer for the future of this legislation,” said Anna-Marta Visky, Our Revolution’s regional organizing coordinator who led the pressure campaign in the district.

This week, S.R.1 – For the People Act, endorsed by Our Revolution, was introduced in the Senate.  The bill addresses voter intimidation and suppression, gerrymandering, dark money, and ethics laws to ensure government works for the people.  Passing S.R.1 is urgent, as GOP lawmakers across the country are pushing baseless election fraud claims in order to pass laws that restrict voter access – 253 bills in 43 states have already been introduced.  Oregon Sen. Jeff Merkley, an S.R. 1 sponsor, said: “Every American – regardless of the color of their skin, where they live, or how much money they have—deserves a seat at the table and an equal voice in their government.  If you really believe in the vision of our republic, you believe in voter empowerment, not voter suppression.”

As part of our Fix the Senate campaign, Our Revolution has been pushing Joe Biden and Senate Democrats to support ending the filibuster – because if we don’t fix our broken Senate, we won’t be able to get any of our policies through.

On our Monday Organizing Call, New York Rep. Mondaire Jones spoke about the importance of ending the filibuster:  “Now that we’ve gotten HR1 (For The People Act) through the House, we need to get it through the Senate and onto President Biden’s desk.  We can’t get there if we don’t abolish the Jim Crow filibuster.  The 50 senators who voted for the American Rescue Plan represent 40 million more people than the 50 senators who voted against it.  We cannot continue to stack the deck against popular, necessary legislation.  The filibuster has to go.”

Senate Minority Leader Mitch McConnell warned that if Democrats end the filibuster, it would grind the Senate to a halt “like a 100-car pile-up” and lead to a “scorched earth” response by Republicans, who would derail Democrats’ agenda in retaliation.  But President Biden, for the first time, has endorsed reforming the filibuster to a “talking” filibuster, where opponents would be required to make their case on the Senate floor.

Become a MOVEMENT BUILDER and support help us hire ORGANIZERS in Arizona & West Virginia to fight the filibuster!

While we press President Biden to cancel federal student debt, Our Revolution is part of a coalition calling on his administration to replace Trump-era appointees at the Department of Education’s Office of Federal Student Aid with strong advocates for the interests of student borrowers.  In a letter to Secretary of Education Miguel Cardona and White House Chief of Staff Ron Klain, we argue against the continuation of Betsy Devos-era policies, and appointees who are too closely aligned with corporate interests.  Politico writes, “Biden is under pressure from the left” and “progressives are raising a slew of issues” involving the administration’s management of student debt.

On Saturday, Our Revolution Ohio rallied at the Amazon-owned Whole Foods with Nina Turner to demand Amazon end illegal union-busting.  Nina recently picked-up the endorsement of several unions, and The Wall Street Journal noted that if Nina is elected to Congress “she will push Democratic leaders to the left on healthcare, climate and the economy.”  Carl Kelemen – an Our Revolution Ohio leader – also commented on the national significance of the race:  “The idea that a candidate who is championing Medicare for All or the Green New Deal could win would be a signal that this is where we need to go.”

Today is Election Day for the people in Louisiana’s 2nd Congressional District, which stretches from New Orleans to Baton Rouge.   We have endorsed Karen Carter Peterson in this special election to fill Cedric Richmond’s former Congressional seat.  If you or anyone you know is in this District, get out to vote today to send an unapologetically progressive champion to Capitol Hill! 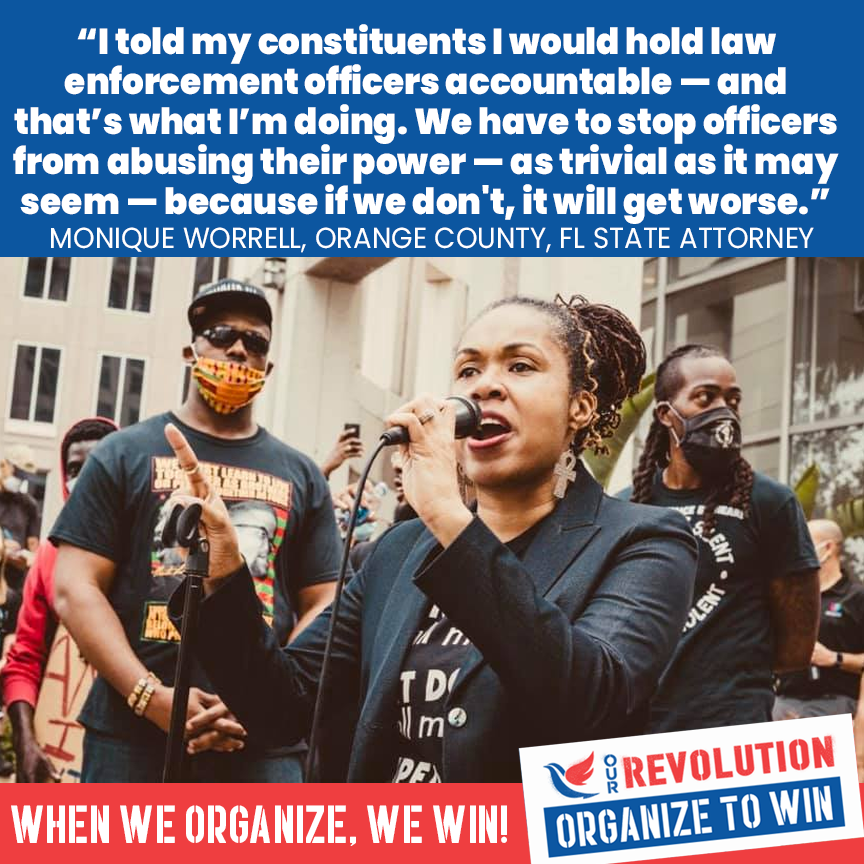 Our Revolution Florida’s State Organizing Meeting featured Monique Worrell, the new Orange-Osceola County State Attorney endorsed by Our Revolution.  Three months into her new role and Monique is already making a difference with a new incarceration policy aimed at reducing the jail population of non-violent offenders for the health and safety of inmates and jail employees. She is also creating a unit charged with investigating public allegations of police brutality and misconduct, and dismantling the school-to-prison pipeline so that incarceration becomes a last resort.  “I’m working hard every day to change the culture of prosecution because it’s the culture that’s led to mass incarceration in this country for decades.”

Our Revolution South Carolina’s March Meeting focused on healthcare justice.  Labor leader Erin McKee noted that even with employer-provided insurance, workers spend tens of thousands of dollars annually out of pocket for healthcare without even knowing it.  Watch the meeting here.

Maryland Delegate Sheila Ruth – who also co-chairs Our Revolution Baltimore – is celebrating the passage of HB700 — her first-ever bill in the Maryland House of Delegates!

“HB700 protects students from criminalization of normal adolescent behavior and closes off a path in the school-to-prison pipeline,” Sheila said.  “82% of students charged under the current law are Black and Brown.  It also disproportionately impacts disabled students.

Now onto the Senate!

A slate of progressives led by new chair Judith Whitmer swept the Nevada Democratic Party elections!  But in an unprecedented move, the defeated establishment staff resigned and reportedly transferred $450,000 from the state party treasury to the DSCC.  Our Revolution condemns this effort to undermine progressive power in a critical swing state, and we’ve launched a donation effort to help them recoup the funding and continue our national work to make the party progressive in every state.

CLICK HERE to split a donation between the new progressive Nevada Democratic Party & Our Revolution!

Our Revolution California is supporting Delaine Eastin – a former state superintendent of public instruction – to be the next chair of the California Democratic Party.  On our National Organizing Call she outlined her priorities, which include democratizing the party, electing more progressives across, and reforming campaign finance.  “I’m running for state party chair because we can and we must do better.”  Delaine would be the first woman to lead the CDP in 35 years.

Our Revolution Oregon hosted a debate for the Democratic Administrative Committee candidates running for the top spots in the Oregon Democratic Party.   We were joined by John Knight, Eileen Kiely, Pete Lee, Rosa Colquitt, Jeff Weston, Keith Haxton and KC Hampson. The candidates made their case on why they are uniquely qualified to lead the party and had a productive conversation on a lot of the issues impacting working class Oregonians. You can watch the debate here.

On Sunday, Rep. Joe Neguse will join Our Revolution Colorado to discuss the newly introduced Medicare for All Act of 2021.   The call will also focus on Colorado healthcare initiatives and approval voting!