On Monday, April 12th, Sen. Jeff Merkley will kick-off our first call of the month with the latest on For the People Act and the fight against the filibuster.  We will also be joined by newly elected progressive champions from Illinois and Missouri, and get an update on California’s fight for universal health care!

IN THIS ISSUE – A SUPER TUESDAY FOR PROGRESSIVES!

Meet our 24 endorsed progressive champions in America’s heartland who we helped elect to city and township councils, school boards, and other local high-impact offices!  And read the latest on the CPC, cannabis legalization in New York, ending cash bail in California, and other progressive wins!

Are YOU a Movement Builder?   Make a recurring monthly donation of $5 and become an official member of Our Revolution!

This week, 24 Our Revolution-endorsed candidates won their races to serve as mayors, city councilors and school board members in America’s heartland!

Our Illinois Revolution also won big with wins in down-ballot races across the state.  In Joliet, Our Revolution members organized a complete takeover of the township government; In Evanston, after electing Daniel Biss as Mayor last month, we helped a slate of progressives win city clerk and aldermanic seats; and in Urbana, two Our Revolution candidates won their races for City Council!

Nina Turner announced that she has raised well over $1 million so far, giving her the fundraising edge in the race to represent OH-11 in Congress. Our Revolution Ohio volunteers are an important reason that Nina’s campaign has caught fire.  Since January, Our Revolution Ohio has signed up over 1,000 volunteers and made over 70,000 phone calls to voters.  Our members are now training canvassers to hit the doors as part of the Neighbors for Nina Program. 20 volunteers have completed the first training session which included:  Talking to Voters, Team Building, and Leadership Building. The next training session is Monday, April 19th and we invite all our Ohio members to RSVP HERE and become a Neighbor for Nina!

With early voting starting today, Our Revolution-endorsed Karen Carter Peterson is in a tough race against the establishment to fill the Congressional seat vacated by top Biden advisor Cedric Richmond.  Richmond endorsed Karen’s closest rival – State Sen. Troy Carter –  who finished first in the runoff.  As The American Prospect notes:  “Troy Carter would bring another moderate with ties to the oil and gas industry to Capitol Hill.  Karen Carter Peterson would add to the ranks of the growing Progressive Caucus, now the largest voting bloc in the House’s Democratic majority, and be another vocal supporter of the Green New Deal.”

There’s just two weeks until Election Day!  Sign-up to phonebank with our community Wednesday night to Turn Out the PROGRESSIVE VOTE!

Our Revolution Movement Builders fund our Get Out the Vote operations for Nina, Karen and over 100 progressives candidates running this year in New York, New Jersey, Virginia, Texas and other states.

Can we count on you to pitch-in so can ramp-up our campaign operation to challenge establishment candidates and win more races across the country? 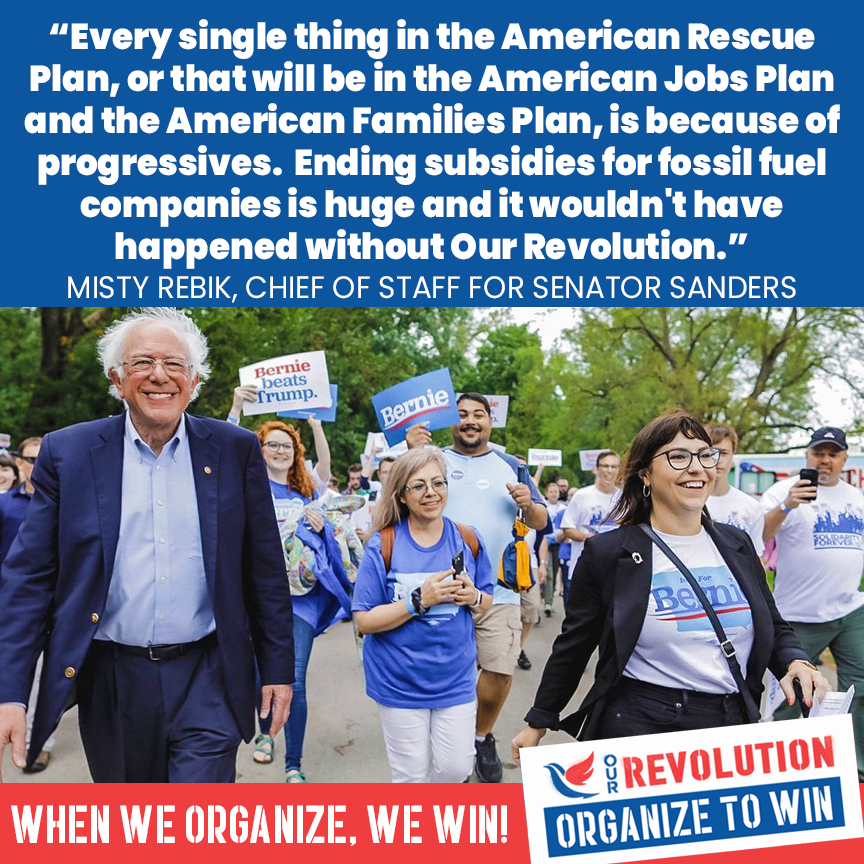 On Thursday, Our Revolution Iowa held its 2021 Kickoff Call which featured Misty Rebik, the Chief of Staff for Sen. Bernie Sanders.  Misty credited our movement for elevating progressive voices in the Biden Administration.  “Every single thing that happened in the American Rescue Plan, or that’s going to happen in the American Jobs Plan and the American Families Plan, is because of progressives.  Ending subsidies for fossil fuel companies is huge and it wouldn’t have happened without you.  We’re talking to high-level folks in the White House, and they’re listening.  We are changing the narrative in this country about what is possible.”

Our Revolution-endorsed leaders in the Congressional Progressive Caucus – including Reps. Pramila Jayapal, Ilhan Omar, Mark Pocan, Barbara Lee, and Cori Bush — met with Biden’s chief of staff Ron Klain at the White House recently to discuss progressive priorities.  They pressed for commitments that Biden’s Build Back Better Plan will address climate change, health care, family infrastructure, and income and wealth inequality, and that a $15 minimum wage will happen.  Politico marveled at the Caucus’s influence:  “We should pause for a second to reflect on the power of the CPC right now. A few years ago, the group was viewed as a bunch of radicals with no clout. Now they’re flexing and commanding the attention of the White House.”

Our Revolution Cleveland is working in coalition with Clevelanders for City Council Reform to fight for a more open and responsive city government.  In February, we urged Council President Kevin Kelley to support allowing public comments at council meetings. Although Kelley has not responded, six council members are co-sponsoring legislation to authorize public comments.  On Monday at 12p, Our Revolution Cleveland is participating in a press conference on the steps of City Hall. RSVP HERE to attend or watch the rally live on Our Revolution Ohio’s FACEBOOK PAGE.

Our Revolution Tennessee members have been rallying outside the district office of Democratic US Rep. Jim Cooper to call on him to co-sponsor the Medicare for All Act of 2021, the THRIVE Resolution, and DC Statehood, and other progressive priorities.  Not only has Cooper refused to meet, he also didn’t respond to Our Revolution’s questions in the Tribune on what, if any, support he’s given to Nashville’s Black community.

On the heels of Amazon’s aggressive anti-union campaign against warehouse workers in Alabama, Our Revolution is standing with our allies in the labor movement to demand accountability.  The Retail, Wholesale and Department Store Union (RWDSU)  is calling on the federal government to punish Amazon for unfair labor practices that created “an atmosphere of confusion, coercion and/or fear of reprisals.”   And Larry Cohen, Board Chair of Our Revolution, is calling for fundamental labor law reforms.  As he told The New York Times, the loss “can be an opportunity to look beyond the PRO Act and why we need labor law with a focus on bargaining by sector.”

New York has become the 17th state to legalize recreational marijuana!  Our Revolution-endorsed New York City Public Advocate Jumaane Williams praised the new law, saying it “reflects a commitment to addressing and undoing harm to communities that were disproportionately impacted by decades of disparate policing, and expunging the records of those whose lives were ruined by a marijuana-related conviction.”  Our Revolution supported similar successful efforts in New Jersey, Arizona, and Montana, as well as legislation passed by the House.   Sen. Chuck Schumer recently pledged to move forward on cannabis reform at the federal level “with or without” Joe Biden.

The U.S. is one of only two countries in the world where a person can be locked up because they can’t afford bail.  This policy disproportionately affects people of color without improving safety, and can result in arrestees languishing in jail for months, or even years.  Now, the California Supreme Court, in a unanimous decision, has ruled that the state’s cash bail policy unfairly burdens low-income Californians and is unconstitutional.  Our Revolution has been leading on this issue by helping to elect progressive district attorneys who have pledged to end cash bail, like San Francisco D.A. Chesa Boudin who ended the policy in his first two weeks in office.

Last week, US Rep. Kweisi Mfume joined well over one hundred fellow Democratic co-sponsors of the Medicare for All Act of 2021. Our Revolution Maryland activists targeted the Baltimore-based Congressman via coordinated email and telephone campaigns.  Hours before a scheduled phone bank to Mfume, he announced his support for the common sense solution to our overpriced often inaccessible healthcare system.

Join Our Illinois Revolution for a talk with

US Rep. Robin Kelly – the new Chair of the Illinois Democratic Party – about her vision for the future, and talk about our upcoming elections and endorsements!

Our Revolution Texas GOTV begins this Thursday! As an early celebration of Earth Day, we’ll be hearing from Texas State Rep. Erin Ewiener, chair of the Texas House Environmental Caucus. We’ll also be joined by Fort Worth Mayoral candidate and progressive star Deborah Peoples who is running to help turn Texas blue and Mina Davis for Hutto ISD School Board running to show what progressives can do locally. You won’t want to miss this broadcast! Check out the Pre-game forum!